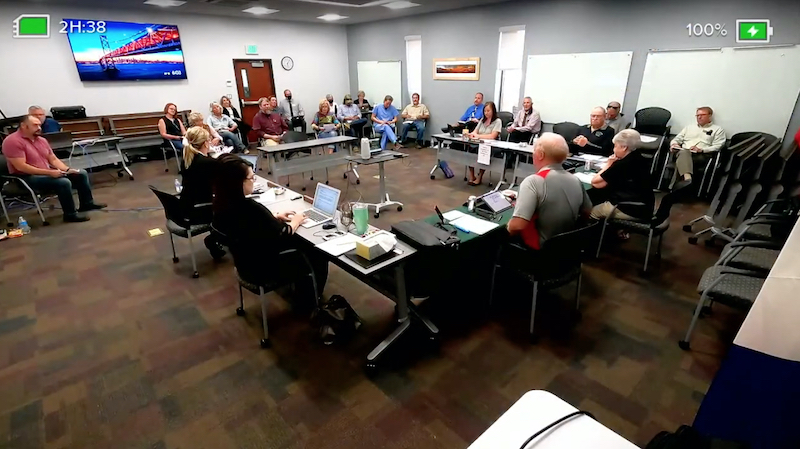 JOANN KALENAK, DCCR SENIOR BLOGGER, June 7, 2021 — Today, Delta County Citizen Report filed a notice of intent to sue the Delta County Board of Education for open meeting and open record violations. The complaint, sent to school district attorney David Skarka of Clay, Dodson & Skarka, PLLC, Superintendent Caryn Gibson and all five board members, outlines several open meeting violations during a May 20, 2021 school board regular session in which board members unanimously voted not to support Comprehensive Human Sexuality Education (CHSE) in the district.

The complaint focuses on several tenants of Colorado Revised Statutes, Open Meeting Law concerning full and timely public notice including adequate executive and regular session agenda descriptions; open public access to all meetings and the conducting of business in full public view. Chris Mochulsky, attorney for DCCR, describes detailed instances where the school board violated each of these tenants during the May 20 meeting and, as a result, has asked that the board rescind the resolution that they unanimously voted to approve.

A brief history of the CHSE topic reveals a steady investigatory campaign on the part of the school board immediately following the passage of HB 19-1032, the act that gives local education boards the option to implement comprehensive human sexuality education in their school districts and receive grant money to do so. A Delta County School District task force was formed to evaluate several curricula and to present the board with their recommendations.

In January 2021, the task force recommended the 3-R’s Program — rights, respect, and responsibility. The Board agreed to develop a community survey and discussion forums to gather public input  — and has repeated this on several occasions since — but then the plan runs off the rails.

At an April 15 regular meeting, school board chair Jan Tuin assured the public that no decision would made until community input was gathered and, then, on April 16, school district staffers announce on Facebook that “The School Board has decided NOT to adopt a CHSE curriculum at this time.”

“Clearly, this board wanted the topic of sex education out of their hair and they broke open meeting laws in their haste to do it,” says DCCR Senior Blogger JoAnn Kalenak.

The complaint asks for two other remedies besides the rescinding of Resolution 2021-15 before filing a lawsuit: DCCR has asked that the topic of discuss during the two May 2021 executive sessions be revealed and that, going forward, the board ensures adequate public forum for the community on the topic of CHSE. Additionally, DCCR has asked that the district develop and adopt an open meeting resolution and an official CORA process.

The school board has two weeks to answer the complaint before DCCR files legal action.

SEE EXHIBIT A  — This is the county’s OML resolution as an example for the school board. This resolution was part of the “settlement” DCCR got when it sued the county for OML violations shortly after the organization was first formed in 2016..

Delta County Citizen Report is an apolitical, 501(c)(3) nonprofit media organization that focuses a fundamentally critical lens towards power by providing reporting and commentary on Delta County, Colorado government activities. We seek to promote community engagement that leads to transformational change. Our blogs will include but are not limited to: Reports on County Commissioner public meetings, county projects, county development plans, county policies, and county budget and finance. Meet our board